Have you come across the concept of the “fourth trimester”? It’s a very simple idea; babies grow in utero during three trimesters; split into three stages of development that last approximately three months each.

Newborn babies are very vulnerable at birth, entirely dependent on their parents for survival. Many theories suggest that babies are in fact “born too early”, needing intense nurturing for a very prolonged period in order to grow and thrive. Compared to many other species, human infants have a very slow rate of development to maturity into adulthood, which means a prolonged childhood, and bringing up children is a labor-intensive process.

The “fourth trimester” is the three to four months following birth; when a baby is still adjusting to its new habitat and almost entirely helpless. There is a huge contrast between life in utero and life in the outside world which makes the transition a challenge.

In utero, baby was consistently warm, nestled inside the fluid of the amniotic sac. It was aware of the sound of blood rushing and the maternal heartbeat, the sound of voices and the gurgling of digestion. Everything would have been muted and muffled, gentle. Baby could move under limited conditions, constrained by soft yet firm walls that provided a consistent boundary. It was also moved gently as its mother went about her daily life, cushioned and secure, with no sensation of falling or suddenness. Baby was constantly nourished, with fuel for growing provided directly by nutrients in the bloodstream from the umbilical cord.

We have no way of knowing exactly what the last weeks of pregnancy inside an increasingly cramped space feels like for a baby, nor what the experience of labor and birth is like. We can monitor for fetal distress, but babies cannot tell us what the process is like for them. It is likely to be uncomfortable and may be distressing; (which is why osteopaths and chiropractors can often make a seemingly irritable baby much happier with some gentle treatment). Once baby is born, the world is utterly different. Warm, soft, gently constrained spaces change to ones that can be cold and surfaces that are hard and flat. Suddenly there will be a sensation of pressure points (being held around the rib cage by large hands), and moving long distances through air, with legs or arms unsupported. This will all be entirely new, this feeling of space. Limbs that were once restrained by uterine walls can now stretch wide with no resistance.

Constant nutrition and nourishment change to feelings of hunger and thirst. Evacuation of bowels and bladder become different sensations, that of being wet or dirty. Wearing clothes and nappies, being cleaned and wiped are very unusual experiences, especially nappy changes, where babies are often pulled up by their feet for easy access.

Deep darkness changes to sudden brightness, there are rapid alterations in light levels and baby has no control over what is coming next. Muffled, near constant gentle noises are replaced by loudness, intermittent sounds, and absolute silence. Constant companionship changes; baby is no longer part of someone and is now often alone. The Moro reflex demonstrates this instinctive fear of falling; a baby who feels suddenly unsupported will spread their arms wide and then draw them in and cry. This primitive reflex is believed to have once helped infants cling to their mother in the evolutionary past, and is often used as an example to demonstrate that infants instinctively expect to be held securely and carried after birth. (ref 1).

You can no doubt begin to see how holding and carrying newborns on the chest in the early weeks and months of their lives, cuddling and snuggling, can help to recreate the safe haven they have been so hastily ejected from.

The natural spread squat position that babies adopt when relaxed is also thought to be part of their evolutionary past, being able to cling to mother to be carried around easily.

A parent’s naked chest is amazingly effective at regulating a baby’s temperature, heart rate and respiratory rate during skin to skin contact after birth. There are many, many other benefits from early skin to skin (ref 2) but beyond this immediate postnatal period, there is still much to gain from understanding why babies love to be held and carried. The sense of smell is one of the first to awaken in the outside world, and babies recognise their mother’s scent.

This is an instant familiarisation and reassurance for babies, a connection with what came before, so being held on the chest, in the tucked up position, warm against skin that smells right, wrapped up in strong arms and rocked gently, sends many babies off to dreamland; once again they feel secure. However, many parents may feel too weary or arms may begin to ache and babies are put down.. and life has to go on, few parents have the opportunity to rest and recover for prolonged periods after birth.

A soft, supportive sling that holds a newborn baby close to the parent in their preferred tucked up position.

Very similar to their position in utero a sling will help baby to feel the same sense of all-around support with a gently resistant boundary, perhaps more reminiscent of their previous home than in-arms carrying.

This is one reason why well-tied, snugly supportive wraps, in particular, seem to be so much enjoyed by babies, as it gives them a sense of security and containment again. Many babywearing parents comment how quickly their little ones seem to fall asleep in the sling, and how much it seems to help reduce the duration and frequency of crying (if all their other needs have been met).

Cuddled close to a parent/carer’s chest, a baby can hear heartbeats and the rumble of a voice around the chest cavity, all sounds it recognizes.

Parents are also more likely to talk to a little person they can see and feel right in front of them (and also on the back of them!) as they go around their daily tasks, compared to babies who are in separate containers. The vibrations of the talking will be soothing to a baby (as well as helping to build language). Movement Is What Babies Know

Parents tend to walk around while babywearing; the movement and rocking will again be very familiar to babies, and we all know that distressed babies tend to settle when they are picked up, patted, and rocked, and how quickly they often wake up as soon as you sit down!

The motion and upright position in a baby carrier will help to develop their muscle strength as well as their sense of balance and co-ordination (through the activation of the vestibular system) which will help them begin to engage with the world around them and want to become part of it!

This is in part due to the increased closeness stimulating oxytocin that triggers milk let down, and also because mothers become more attuned to their babies’ hunger cues. Babywearing facilitates this close contact and it can also help fathers and other caregivers to build bonds with their babies. Perhaps most important of all, babywearing in the early weeks and months helps to build relationships.

The early months and years of a child’s life set the tone for their future, and it is their parents’/carers’ response to them as they reach out that shapes their brains. This can feel like a very heavy responsibility… but babies only need their parents to be good enough, most of the time. When a baby feels that their needs are met often enough, they become confident that this person will not leave them, that brief ruptures in a relationship will be repaired, and they begin to develop a secure attachment.

When parents feel connected to their babies, and the feelings of love and attachment have begun to develop through close contact, it becomes easier to understand baby’s communications, and easier to respond positively. This all helps babies to believe and trust that the new world around them is friendly and welcoming, rather than harsh and unkind.

Such unshakeable trust breeds security and emotional stability and allows children to become happy explorers, confident in the relationships around them.

This is the start of positive mental health and a confident future.

It’s worth recalling that it can take some time for feelings of love and bonding to their tiny new babies to develop in parents and carers. It is rarely an instant rush of life-changing love as soon as the baby arrives. Babies demand to be picked up. It is almost impossible to avoid holding tiny babies… and in the background, as parents keep their vulnerable infants close, the close contact is silent, in the background, triggering the release of oxytocin in the parent/carer.

Oxytocin and soft touch both have a biochemical effect on the stress-response mechanisms of the body, calming anxiety and increasing feelings of well-being and confidence, as well as feelings of love A sling used frequently in the fourth trimester (and beyond!) can, therefore, help a parent to feel better, and this will help them care for their children better. This fourth trimester period is over very quickly. Babies soon begin to recognize that they are separate people; and that they can engage and interact with the world. As their brains develop and their motor and cognitive skills grow, they begin to take their first tentative journeys away from their parents/carers. How important it is to make sure that this journey into confident, happy independence begins as early as possible, as positively as possible, from as strong a foundation as possible.

Carry your baby; it matters! 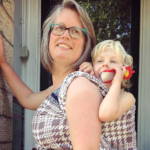 Rosie Knowles is a mum of two and a family doctor in the UK with a particular interest in holistic medicine as well as children and women’s health and mental health. She is a passionate advocate of building secure attachment relationships between children and their carers, due to the long lasting effects this has on future health. Her book, “Why Babywearing Matters”, was published by Pinter and Martin in May 2016 and she has written for a wide range of publications. She trains carrying advocates, peer supporters and health professionals, and speaks at conferences around Europe about why carrying matters.